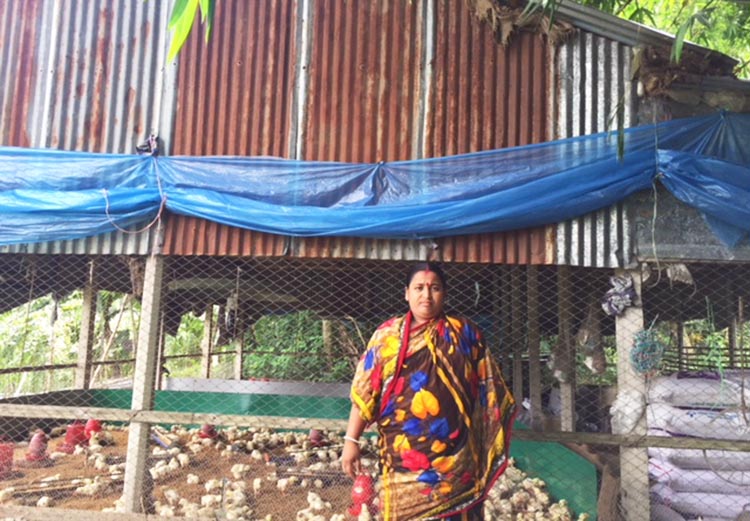 A short study on participation of women in small and medium scale commercial poultry farms in Panchlaish, Delduar, RangpurSadar and KumarkhaliUpazila was conducted by UBINIG (Policy Research for Development Alternative) that was sponsored by BeezBistar Foundation under the issue based project on Food Safety Governance in Poultry sector supported by Pr0moting Knowledge for Accountable System( PROKAS),British Council. The study was conducted during the period of May 2019 - July, 2019 by a research team of UBINIG. The information was collected both in quantitative and qualitative forms. Forty questionnaire-based interviews of small and medium scale broiler farmer (35) and Layer (4) and Sonali (1) were conducted. Eight Focus Group Discussions were held with 90 participants and 8 Key Informant Interviews and In-Depth interviews with different stakeholders were conducted for qualitative information.

The objective of the study was to document quantitative and qualitative information on women’s participation in the commercial poultry sector for facilitating policy decisions.

Executive summary of the Study:Among the 40 farms, 35 (87%) were Broiler, three wereboth Broiler and Layer, one Layer and one Sonali. Eighty two percent of the sample farms were near the house, while 17% were far from house.Forty seven percent of the farms were small (<1000 poultry birds) and 45% were medium (1000 – 2000 poultry birds), only 20% were registered with the Department of Livestock Services( DLS), and were established on land of their own (45%) and on other’s land (47%).

Women’s participation in the most important tasks of broiler chicken farms during production is high, 87% for feeding, 70% for feeding water and 96% for cleaning as reported by women. After production, the broiler chicken are sold to the dealers or to the Beparies. The tasks also include accounts keeping/maintenance of records of production.

In accounting and selling women’s participation reduces to 20 – 25% as compared to 50 – 75% of men’s work. However, women are not entirely deprived of their income. They are holding the money as well 68% for men, 58% for women. Women are participating more than men in the works that require manual labor and those which have to be maintained very carefully in order to ensure quality poultry production.

For the small scale poultry farms, each batch the total man-days of work is 92 person-days including pre- and post- production works with 4 to 11 hours of work per day. Each Shed with continuous production can have 3 to 4 batches of broiler production in a year, thus keeping them employed round the year. The busiest time of spending about 11 hours a day is after production and before marketing. The hens need regular feeding, water and cleaning with the addition of taking weights of the flock to be sold, guarding against dogs/jackals and most importantly contacting the dealers and the negotiations for marketing.

In the poultry farming the risks are higher for women with potential health hazard including reproductive health and social pressure causing mental health problems. Women do not have access to capital and have little training. Men handle the selling of products. Therefore, find the problems of low price and the dependence on the dealers for selling of the products. None has any knowledge of the Fish Feed and Animal Feed Act, 2010, but those who are registered and trained by BBF and CAB referred to the Act. Women identified several risks and problems involved in the poultry farming. The risks involve health and environmental hazards including reproductive health problems, social and mental stress.